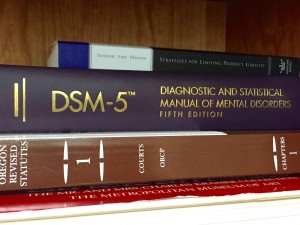 The creation of the fifth edition of Diagnostic and Statistical Manual of Mental Disorders (DSM-5) was a massive undertaking that involved hundreds of psychiatrists, psychologists, physicians, and other medical professionals working together over a 12-year period.  The DSM-5, which replaced the 2000 DSM-IV (TR), is the foundation for reliable diagnosis and treatment of psychological and mental disorders.  As with prior DSM publications, which now date back decades, it is not intended to be a substitute for sound, objective clinical judgment, training, and skill.

Reflecting and prompted by the many new longitudinal studies, research papers, and experimental treatment modalities that have appeared since 2000, this new DSM edition contains significant changes in the classification of some disorders, and the removal or addition of other disorders.  This discussion will provide a brief overview of some of the key changes to the DSM-V and will touch on issues of interest to legal professionals working in the areas of product liability, personal injury, and aviation defense.

In a trial setting, familiarity with the DSM-5 and the underlying literature will be critical to an effective cross-examination of plaintiff’s expert.  Often, with forensic psychologists, the defense can make significant inroads on the basis that plaintiff’s expert is not sufficiently familiar with the DSM or associated literature.  For example, a significant new body of literature related to “resiliency and benefit realization” after a traumatic experience is largely unknown to most plaintiffs’ forensic psychologists.

A substantial percentage of high exposure cases in those categories involve a diagnosis of PTSD by plaintiff’s expert and a Global Assessment of Functioning (GAF) score based on the five-level multiaxial system, with Axis 5 providing the GAF score.  This brief post will focus on the changes to ­– or more accurately, the elimination of – the multiaxial system, as well as the changes to the criteria, symptoms, and diagnosis of PTSD.

A subsequent post will deal specifically with the criteria for PTSD and will include suggestions for cross-examination of plaintiff’s diagnosing mental health professional.

Changes to the Multiaxial System in DSM-5

Despite its widespread use, particularly among some insurance agencies and the government, the multiaxial system in DSM-IV was not required to make a mental disorder diagnosis.  DSM-5 has moved to a nonaxial diagnostic model (formerly AXES I, II, and III), with separate notations for important psychosocial and contextual factors (formerly Axis IV) and disability (formerly Axis V).  The approach of distinguishing diagnosis from psychosocial and contextual factors is also consistent with established WHO and ICD guidelines, which consider the individual’s functional status separately from his or her diagnosis or symptom status.

DSM-IV Axis V consisted of the Global Assessment of Functioning (GAF) scale, representing the clinician’s judgment of the individual’s overall level of “functioning on a hypothetical continuum of mental health-illness.”  It was recommended that the GAF be dropped from DSM-5 for a number of reasons, including its conceptual lack of clarity (e.g., including symptoms, suicide risk, and disabilities in the descriptors) and questionable psychometrics in routine practice.  In order to provide a global measure of disability, the WHO Disability Assessment Schedule (WHODAS) is included in DSM-5 for further study.

Changes to PTSD in DSM-5

Post-Traumatic Stress Disorder (“PTSD”) is a Trauma- and Stressor-Related Disorder.  DSM-5 criteria for PTSD differ significantly from the DSM-IV.  The stressor criterion (Criterion A) is more explicit with regard to events that qualify as “traumatic” experiences.  Also, DSM-IV Criterion A2 (subjective reaction) has been eliminated.

Whereas there were three major symptom clusters in DSM-IV – re-experiencing, avoidance/numbing, and arousal – there are now four symptom clusters in DSM-5 because the avoidance/numbing cluster is divided into two distinct clusters: avoidance and persistent negative alterations in cognitions and mood.  The latter category, which retains most of the DSM-IV numbing symptoms, also includes new or re-conceptualized symptoms such as persistent negative emotional states.  The final cluster – alterations in arousal and reactivity – retains most of the DSM-IV arousal symptoms.  It also includes angry outbursts and reckless or self-destructive behavior.

PTSD is now developmentally sensitive in that diagnostic thresholds have been lowered for children and adolescents.  Furthermore, separate criteria have been added for children age 6 years or younger with this disorder.