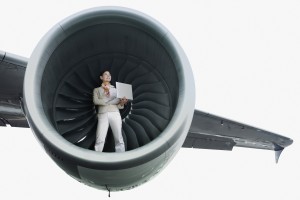 In recent years, wheel-well stowaways have received increasing media attention and public interest. Statistics on the manner of death and the factors that keep stowaways alive are not precise.

Most of these incidents happen for refugee and humanitarian reasons. However, assuming the physiological obstacles of hypothermia and hypoxia are overcome, one major question remains: What legal implications are raised if a stowaway with destructive intent caused a major tragedy?

Usually, a stowaway jumps into an aircraft by hanging on to the airliner’s landing gear as the plane takes off, and the force of the wind can easily make a stowaway fall to his or her death. The overwhelming majority of stowaways are young males. Because stowaways must stay within the landing-gear area, they face other risks too, such as being crushed in a confined space when the gear retracts, falling when the plane is landing, or dying from the heat produced by the engines of the aircraft.

The Data
The following introduction is based on FAA data.

The first recorded case of an aircraft stowaway occurred on June 13, 1929. The Bernard monoplane Oiseau Canari, piloted by Frenchmen Assollant Lefevre, had trouble taking off in spite of its powerful Hispano Suiza engine. The crew later discovered the cause of the problem: a stowaway on board. Despite the overload, the plane landed in Spain after 22 hours of flight.

All of the scientific research suggests that, after takeoff, a stowaway faces two life-threatening conditions during flight: hypoxia and hypothermia. In 1993, the fatality of a 19-year old who stowed away in the wheel well of a plane bound from Columbia to JFK International Airport was one of the 13 wheel-well stowaway flights documented in a report by the U.S. Federal Aviation Administration (FAA), Civil Aeromedical Institute (CAMI), and Flight Safety Foundation (FSF) as having frozen to death.

In 2014 as discussed above, a 16-year old California boy jumped a fence at San Jose International Airport and squeezed into the wheel well of a flight bound for Maui, where he emerged five hours later, in good health. Experts surmised that the teen’s youth could be an advantage, as the brains of young people adapt more easily to hypothermia and hypoxia, for reasons that are not completely understood.

Similarly, a 21-year old Indonesian man hid in the wheel well of a Garuda Indonesia flight from Sumatra to Jakarta.

Some experts also believe that motivation for some (younger) stowaways to escape is prompted by politically dangerous homeland conditions that compel their departure under desperate circumstances. That can affect their brains by producing a “virtual hibernative state,” where their bodies become temporarily more adaptable to trauma.

Possible Outcomes
There may be a number of consequences of security breaches by aircraft wheel-well stowaways and their on-board actions, despite the present physiological obstacles. Among these include:

With the proliferation of wheel-well stowaways, it is likely only a matter of time until a serious mass-tort tragedy occurs.