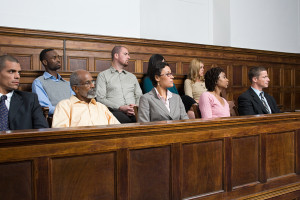 Under Oregon law, the purpose of the grand jury is to determine whether the evidence presented to it, if not contradicted, would be sufficient to support a conviction.[1]   The prosecutor presents evidence and the sworn testimony of witnesses to the members of the grand jury.  The grand jury then deliberates in secret to determine whether or not there is sufficient evidence to support the conviction and, therefore, to issue an indictment.  Grand juries consist of seven persons, five of whom must agree to find an indictment.[2]  The rules of evidence generally apply to grand jury proceedings.[3]

The Oregon Constitution provides that one of two methods may be used procedurally for obtaining felony charges, either by grand jury indictment or by a district attorney’s information filed in circuit court after a showing of probable cause in a preliminary hearing before a magistrate, unless the accused waives either indictment or the preliminary hearing.[4]  In 1983, the Oregon Supreme Court ruled that each county must use the same procedure because failure to use one method or the other violated potential defendants’ Constitutional rights to equal protection and due process.[5]

Generally, no person other than the district attorney or a witness actually under examination shall be present during the sittings of the grand jury.  Exceptions include provisions for a court reporter; parents or guardians of children 12 years of age or under; parents or guardians of persons with mental retardation; interpreters; and, when appropriate, a guard, medical or other special attendant, or nurse. [6]   No person, including the district attorney, may be present during grand jury deliberations and voting on a matter before it.[7]

Grand jury proceedings are held in secret.  ORS 135.855 provides that “[t]ranscripts, recordings or memoranda of testimony of witnesses before the grand jury, except transcripts or recordings of statements made by the defendant,” shall not be disclosed.  Transcripts of proceedings are not created in Oregon state court.  The only records of proceedings are the notes of the jurors and the prosecutor.  Each juror also takes an oath to “keep secret the proceedings before you, the counsel of the state, your own counsel and that of your fellows…”[8]